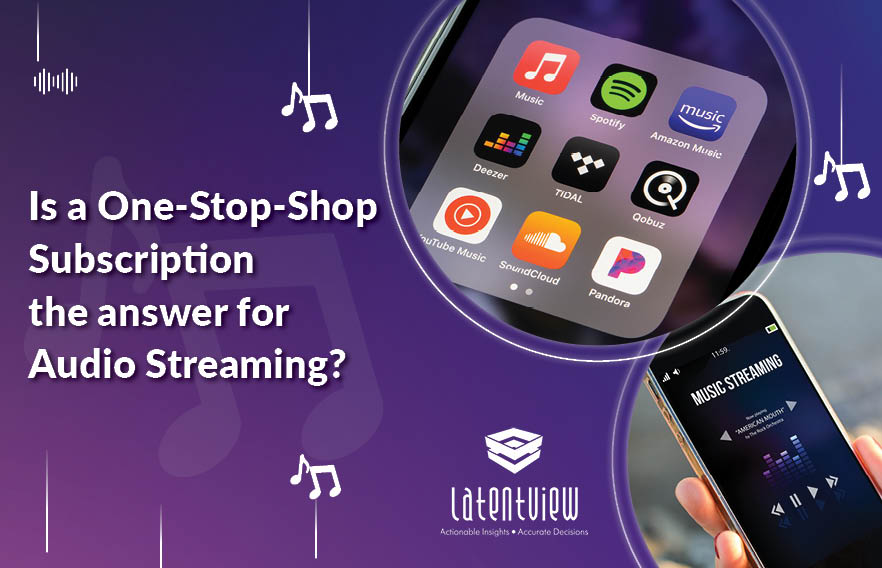 Is a One-Stop-Shop Subscription the answer for Audio Streaming?

When Daniel Ek and Martin Lorentzon first founded their startup Spotify in 2006, the music industry was grappling with plummeting CD sales and fretting about rampant music piracy on the internet. Just 15 years later, Spotify is the leading contender in a global music streaming subscription market that has signed up more than half a billion people worldwide.

Spotify’s one-stop-shop subscription model for music and podcast streaming may seem to be winning out. But the reality is that Spotify is scrambling to supplement its subscription-based business and find its footing as a sustainable business. The company has bet on amassing the most compelling audio content to build out its subscriber base along with attracting big advertisers.

Rivals such as Amazon, Apple, and Google are singing a different tune when it comes to audio streaming subscriptions. For these tech titans, the monthly subscription revenue from audio streaming represents just one small piece of the much bigger business puzzle. Many are using audio content as an enticing onramp for consumers to enter a superhighway of tech services, where there are plenty of tollbooths ready to collect more money.

Since launching in 2006, Spotify has risen to become an undisputed leader in digital audio streaming. The company held a 31 percent market share in the global streaming music subscription market as of mid-2021, with Apple Music coming in second at 15 percent.

This strong appeal among audio listeners owes much to Spotify’s user-friendly interface, clever marketing through social media, and the promise of providing all the audio content anyone might want to stream all in one place. This convenient one-stop-shop approach stands in contrast to the approach of competitor Apple, which has largely split music and podcast content among separate services.

But Spotify faces a significant challenge compared to its major competitors that are backed by the largest tech companies in the world—its business currently lives or dies based on how well it can monetize all its listeners through either subscription or advertising. As The Information has pointed out, Spotify is currently caught up in a cycle of trying to collect subscriber fees faster than it pays out money to music publishers.

A recent pivot to recruiting podcasting talent is allowing Spotify to charge advertisers top dollar for the privilege of running ads against exclusive audio content. This strategy has shown early signs of success, with Spotify’s ad revenue jumping from just 9 percent of total revenue to 12 percent in 2021. But Spotify still reported an annual loss of $38.4 million against an overall revenue of $10.9 billion in 2021.

Coming up behind Spotify in the streaming music subscription market is Apple Music with 78 million paid subscribers. But the Apple to Spotify comparison shows key differences in strategy for both the subscription model and use of audio content.

First, Apple Music has no free ad-supported plan. Instead, every Apple Music user who wants to stream music must become a paid subscriber. That emphasizes the Apple Music subscription value proposition as a listening experience that always delivers high-quality audio with no ads.

Second, Apple has largely separated its music streaming content from podcast content by having two different apps in the form of Apple Music and Apple Podcasts. This lack of integration between music and podcast content may somewhat diminish the appeal of the Apple Music subscription value proposition.

The Apple strategy can seem much more rigid and inflexible for consumers compared to Spotify. But Apple does have significant advantages over Spotify because audio content is just one small part of its much larger business that generated $378 billion in 2021.

The fact that Apple Music and Apple Podcasts are part of a bigger Apple services ecosystem creates additional business opportunities. For example, Apple Music forms a core part of the value proposition for the Apple One subscription package that also includes services such as Apple TV+, Apple Arcade, and iCloud storage.

That all feeds into the Apple business strategy of keeping customers using its many software services while buying Apple hardware such as iPhones and Macbooks. The bigger Apple ecosystem also provides advantages for acquiring new subscribers, given that Apple Music and Apple Podcasts come preloaded as the default apps on Apple devices.

Amazon held a 13 percent share of the global streaming music subscription market in 2021, just behind Apple. The company’s most Spotify-like service is Amazon Music, which has a premium paid subscription tier called Amazon Unlimited that features the usual high-quality audio and ad-free listening experience.

Amazon Music also hosts both music and podcasts in a one-stop-shop approach similar to Spotify. But whereas Spotify must convince potential listeners and subscribers to download and try out its service, Amazon Music enjoys additional onboarding opportunities related to the broader Amazon tech ecosystem.

For example, Amazon Music has an additional tier called Amazon Music Prime that delivers a lower-quality but still ad-free listening experience with a smaller library of songs to members of the Amazon Prime subscription program. It’s a clear attempt to upsell Prime subscribers on Amazon Music Unlimited, as evidenced by a promotion offering a 3-month free trial of Unlimited to Prime members.

Like Apple, Amazon also has a hardware business that creates synergy with services like Amazon Music. The Amazon Echo brand of smart speakers allows users to command digital assistant Alexa to play songs or podcasts from Amazon Music.

It may come as a surprise that Google-owned YouTube has become the go-to music streaming app for many U.S. adults, particularly younger consumers and dedicated audiophiles who are seeking new songs or podcasts. A 2021 survey found that 44 percent of all U.S. adults use YouTube to listen to music, well ahead of the 27 percent who reported using Spotify.

The video streaming service is striking a special chord with younger Gen Z and Millennial consumers, according to MIDiA researchers. A 2021 Edison Research report about “super listeners” who listen to five or more hours of podcasts weekly also showed YouTube contending with Spotify as the most used service.

When asked about finding new podcasts, the most popular response among super listeners was that they searched on YouTube. Many podcasters have already recognized the marketing power of putting some of their content in front of YouTube’s more than two billion users worldwide. So it’s not surprising that YouTube is reportedly planning to add a dedicated podcasts homepage and additional monetization features.

That all helps explain why YouTube has become the fastest-growing Western service in the global streaming music subscription market, even as it trails behind Spotify and other rivals with an 8 percent market share. YouTube’s subscriber base grew by more than 50 percent between 2020 and 2021.

Spotify is still the audio streaming service to beat, and the convenience of its one-stop-shop model for audio listening cannot be denied as a compelling subscription value proposition from a customer’s perspective. But the company’s global market share is still gradually eroding in the face of fierce competition from Silicon Valley’s tech giants.

Despite the early success of its music subscription model, Spotify has recognized the need to diversify its business. The company’s willingness to spend $200 million on gaining exclusive rights to host “The Joe Rogan Experience” over three and a half years shows a commitment to growing its advertising business alongside its subscription revenue stream. The question that remains to be seen is whether this strategy will help Spotify become profitable and help it defend its market position.  Its rivals Amazon, Apple, and Google have considerably deeper cash reserves and are consistently profitable thanks to other arms of their more diverse businesses

Having a compelling subscription value proposition in the audio streaming market can still prove incredibly valuable from a customer engagement and loyalty perspective. But companies need to think about how their subscription strategy delivers profits and fits within a broader business model that can create synergies for converting casual customers into subscribers, upselling subscribers on additional services, and attracting advertising dollars.