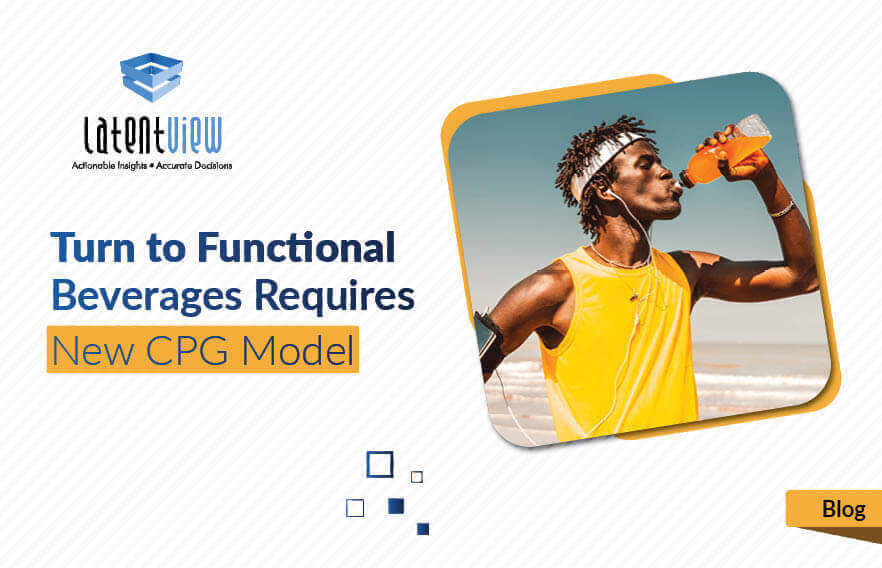 If you want to drink something that will reinforce your immune system, boost your energy levels, soothe your anxiety, or even help you sleep, there is almost certainly a beverage promising to do just that. The pandemic has spurred increasingly health-conscious consumers to reach for all sorts of functional beverages containing a wide array of nutrients and bioactive compounds.

When the pandemic first started, my LatentView Analytics colleague Kaushik Boruah and I predicted that health and wellness concerns could accelerate the ongoing shift in consumer preferences toward functional food and beverages, with a potentially significant and lasting impact on the market. Despite 2020 sales growth being somewhat restrained by lockdowns and consumer shifts in shopping habits, the functional beverages market has experienced growth of almost 16 percent in sales between November 2020 and November 2021, according to data research firm Spins.

A growing consumer focus on holistic health and wellness has transformed seemingly every corner of the functional beverages market. People expect their drinks to not only provide general nutrition but also to deliver benefits for their digestive and cognitive health. The Hartman Group’s Functional Food & Beverage and Supplements report in 2020 found that 56 percent of consumers turn to functional beverages to treat or prevent specific conditions, with many looking beyond general prevention perks to enhance their energy levels, immunity, digestion, fitness, and control their weight.

In response, consumer packaged goods (CPG) companies have launched a dizzying array of new functional beverages designed to enhance health and fitness while cutting back on sugar and other less healthy ingredients. These functional beverages often feature premium pricing, along with smaller pack sizes and containers, such as 8-ounce mini-cans compared to the traditional 12-ounce cans.

Large CPGs must understand which broad trends in functional beverages will outlast the pandemic—but they must also have the organizational agility to swiftly identify and invest in growth opportunities among the many niches in the fragmented functional beverages market. CPGs can no longer simply rely on huge “cash cow” brands in the traditional soda and juice category designed for mass appeal.

Drinking to Your (Mental) Health

The functional beverages market is much larger than just energy and sports drinks. Many functional beverages nowadays include ingredients that promise to relieve stress, especially as people confront the challenges of both Covid-19 infection risks and the broader impacts on personal lifestyles and the economy.

With March 11, 2022, marking the second anniversary of the pandemic, the American Psychological Association found 58 percent of Americans agreeing that the pandemic remains a daily stressor. The vast majority (87 percent) also agreed that it felt like there had been a constant stream of crises over the past two years, with the addition of factors such as inflation, supply chain issues, and the war in Ukraine.

So it’s no accident that cannabis-infused beverages have seemingly achieved more mainstream acceptance during the pandemic with their promise of benefits such as reducing anxiety, improving sleep, and pain relief. A 2022 Morning Consult report found that Millennial consumers, in particular, are twice as likely as all U.S. adults to have tried CBD-infused and THC-infused beverages.

This trend is exemplified by Colorado-based Keef Brands, the best-selling cannabis beverage brand in the U.S. and a pioneer in this category. It serves practically every cannabis market demographic with diverse THC-infused product lines such as sodas, sparkling waters, energy drinks, and mocktails.

By the end of 2021, the cannabis-infused beverage business had grown to 85 percent of Keef’s overall revenue, a significant increase in share compared to having been 50 percent of overall revenue three years ago. And the potential market is growing as more states move to legalize cannabis products.

Digestive Health in a Bottle

An even bigger category of functional beverages promises to improve digestive health. Many consumers are familiar with probiotics that contain live “friendly” bacteria intended to help with digestion in the human gastrointestinal tract. By comparison, prebiotics have the dietary fiber that the bacteria feed on, while postbiotics simply contain the metabolites that the live bacteria produce.

In 2020 alone, digestive health drinks represented 34 percent of total functional beverage launches in North America, according to the Wisconsin-based company Kerry. The company’s global survey of consumers also found that 25 percent had used a probiotic-containing product in the past six months, up from 21 percent in 2019.

Two leading brands in the functional sodas category exemplify the prebiotic trend. Olipop offers seven flavors of soda designed to promote digestive health through prebiotics and plant fiber. It has also leaned into the “healthier” soda trend with each 12-ounce can having just 2 to 5 grams of sugar, compared to 39 grams of sugar in a classic Coke.

Meanwhile, Dallas-based Poppi uses apple cider vinegar as the base ingredient for its claim to provide prebiotic benefits, with each 12-ounce can containing less than 5 grams of sugar. The latter has proven especially popular among Gen Z consumers on social media, such as TikTok.

These prebiotic soda brands are already being sold through major retailers such as Target, Kroger, Whole Foods, Walmart, and 7-Eleven. David Lester, co-founder of Olipop, also made it clear that he has his sights set on the biggest competition: “We’ve been really focused on going toe to toe with some of the biggest CPG brands in the world and see if we can compete with that consumer.”

While CPG giants Coke and PepsiCo still dominate the overall soda market and other beverage markets, it’s clear that many smaller companies and brands are rising quickly within the functional beverage categories. Staking a claim in these spaces will require large CPG companies to develop new strategies for developing products that appeal directly to consumer motivations.

Any CPG strategy shift must acknowledge how functional beverage consumers are an incredibly diverse group seeking many different health and wellness benefits. This can be seen in the Brightfield Group’s Evergi platform survey back in 2020 that compared consumers of specific functional beverages. For example, kombucha and turmeric tea both come with supposed gut health and immune system benefits, but kombucha drinkers gravitated toward relaxation and focus benefits, while turmeric tea drinkers emphasize better immune health and holistic wellness.

That means CPG companies must refocus on developing or investing in the smaller, high-margin brand offerings that meet specific consumer expectations. As I explained in my article about the lost opportunity for CPG players to get closer to consumers, this will require a significant reorganization around having the capacity for responding more quickly to consumer behavior trends and to experiment with new products.

The CPG heavyweights have been taking certain steps in response to evolving consumer tastes that prioritize health and functional benefits over sugary sweetness. PepsiCo has slimmed down its juice offerings by selling off the Tropicana and Naked juice businesses while building out its sparkling water offerings and boosting its small energy drink brands. Similarly, Coca-Cola sold off its Odwalla Juice and Zico coconut water businesses in 2021.

PepsiCo has also begun testing the waters of functional beverages. In the fall of 2020, it debuted its functional water brand Driftwell which promotes relaxation and better sleep quality. Driftwell comes in 7.5-ounce cans that each contain 200 milligrams of the amino acid L-theanine, a substance found in green and black tea that is promoted for its calming benefits. This year, PepsiCo-owned Rockstar Energy launched a Rockstar Unplugged functional beverage line containing hemp seed oil along with B vitamins and caffeine.

Even before the pandemic in 2019, Coca-Cola had invested $20 million in the company Health-Ade which sells probiotic kombucha beverages. It also oversaw the 2020 launch of a Coca-Cola Energy drink containing guarana and various vitamins before discontinuing the product in 2021. But it has been quieter than PepsiCo on the functional beverage front as of late.

In the big picture, CPG giants will need to take many more such steps to compete with the smaller brands already dominating the functional beverage market. Both PepsiCo and Coca-Cola have also started pivoting toward alcoholic beverage offerings—but that’s a whole different can of hard seltzer.

Partner with Us
At LatentView Analytics our data science experts seize the opportunity to make sense of big data and turn them into insights for our clients to make data-driven business decisions. Get in touch with us at sales@latentview.com to know more.