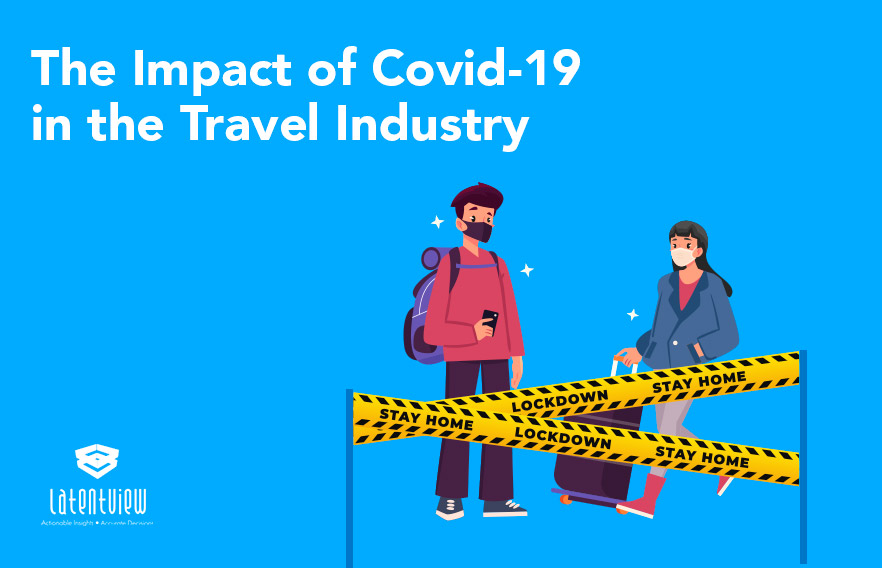 Impact of COVID-19 on the Travel Industry

What is the Impact of the Outbreak on the Travel Industry?

The COVID-19 pandemic, which was first reported in Wuhan’s Chinese city, has affected almost every sector of the economy. Among all the sectors, the travel and tourism industry has stumbled to a greater extent. This industry has contributed a striking $2.6 trillion to the economy before COVID-19. Being hard hit by the pandemic, it has lost around 7.7 million jobs, of which the highest being the U.S. contributing 15.8 million jobs globally, and travel is the second-largest exports in the U.S.

Tracking the Impact for the Travel Industry in the U.S.

To interpret the damage caused by the pandemic for the travel industry and prevent further detriments, an interactive COVID-19 analysis dashboard has been designed to

This global pandemic has increased the unemployment rate to 51%, which is twice that of the Global Depression. This industry is set to suffer an 81% fall in revenue as restrictions are still available across the world. There was a drastic drop in travel spending, which is expected to cause a predominant impact on the economy with a loss of $1.2 trillion.

It is important to analyze the mobility pattern of the public to get insights into the impact of the travel industry. When stay at home order was enforced on 13th March in the U.S., there was a drastic drop in people’s movement. In contrast, when the relaxations started in May, there was a spike in public movement, especially in the parks, due to lockdown fatigue. It is evident that traveling for business activities has been dropped and people working from home has increased tremendously.

Additionally, more than half of U.S. travelers will prefer domestic trips over international trips. International visits to the U.S. are curtailed due to travel bans from different countries and the fear to travel since the U.S. remains to be the topmost hotspot country.

As mobility reduced, it is evident that consumer spending suffered a huge dip.

How did the Airlines, Hotel & Cruise Lines Face the Battle?

The pandemic has forced the aviation industry to lay off their employees as passenger traffic slipped down.

As the passengers are staying indoors, travel spending is reduced with minimal essential bookings. The highest number of flight cancellations was witnessed during March and April due to a travel ban. This raises an alarm that the longer the restrictions are in place, the airlines will run out of liquidity.

There was a 96% reduction in air traffic in 2020 as compared to the four months in 2019. This decline in air traffic is set to exceed airline capacity cuts. The Domestic rebound potential is moderate, whereas the International rebound is set to be slow for the first half of 2020.

The hotel industry suffered revenue loss, which drove unprecedented job loss. Over 7.7M jobs were lost in April, with 70% of direct hotel employees laid off, and hotel workers lost more than $2.4B in earnings each week. 80% of the hotel rooms were left unoccupied, with 2020 recorded for the lowest hotel occupancy. For the mid-week of March, hotel booking was down 24.4% to 53% year-over-year. Revenue per available room, a key industry metric, fell to $63.74.

The Cruise industry scrambled to survive as a “No sail order” under the CDC’s Stage 4 travel advisory rule. All the cruises suspended their operations till September 2020, while Caribbean ships have extended it till the mid of next year. The carnival cruise lines, which serve nearly half of the global Cruise industry, had publicized outbreaks on its ships, especially Diamond Princess and Zaandam. The share prices of this industry plummeted, with major cruise lines started selling their stocks and bonds.

With the decrease in consumer spending across all three industries, the primary focus remains on their sentiments towards reopening.

People began to feel more unsafe and anxious because of uncertainties regarding health insurance coverage for COVID infection while in foreign countries and vaccine availability. But, Millennials and Gen-Z prefer uncrowded trips like camping and R.V. trips. The gradual easing of travel restrictions will unbind the desire to break free after weeks of confinement. This can be witnessed through a decent spike in people’s movement during holidays, which increased to 16.5% on the 4th of July, and this trend is expected for the near future.

Domestic travelers can understand travel restrictions in each and every state to plan their travel from the U.S. state map in the dashboard.

Will COVID-19 Unleash the Travellers from being Grounded?

Airlines, hotels, and tour operators need to capture a shift early on, with clear operations and marketing strategies, in response to such trends.

The ongoing crisis serves as a wake-up call for the travel industry to work together on open data initiatives during the aftermath. Airlines, airports, and hotels must break all the data silos and work together with analytical companies for travelers to practice social distancing norms.