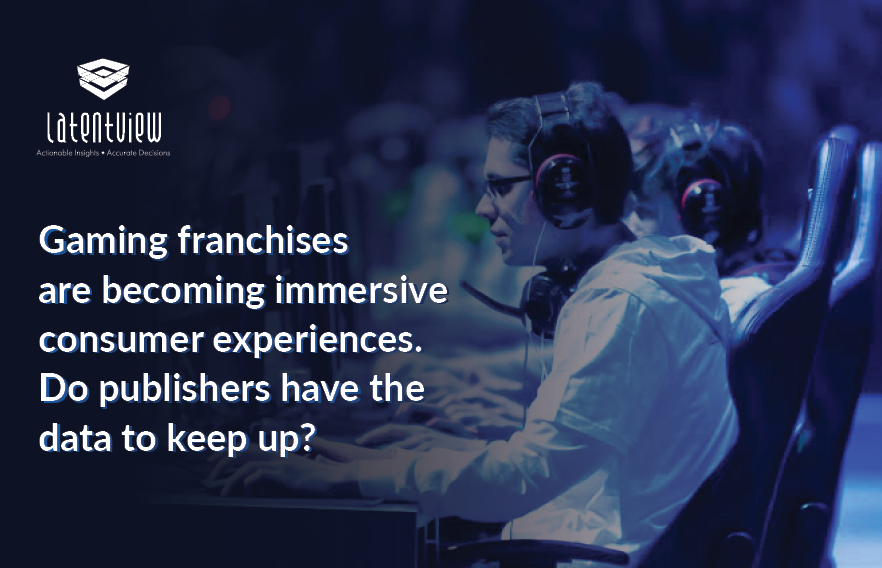 Gaming franchises are becoming immersive consumer experiences. Do publishers have the data to keep up?

When I was growing up, the most important franchises in my life were Batman and Teenage Mutant Ninja Turtles. From humble comic book beginnings, these brands extended to include everything from movies and TV shows to toys, video games, clothing, and theme park rides. If you had the desire (and the money), you could turn a single movie into an immersive, yet fractured, experience.

Today many of the world’s most well-known franchises, rather than expanding into gaming, are being born from gaming. From Fortnite and League of Legends to Minecraft and Call of Duty, gaming franchises have become as ubiquitous as the newest film releases from Disney or Marvel. This shift in importance shouldn’t come as a surprise. With the rise of streaming platforms and the sheer volume of premium video content being released on a weekly basis, new movies and TV franchises struggle to gain market share as they did in previous decades. On the other hand, video games can often hold their users’ attention for weeks and months on end with expansive and dynamic virtual environments to explore, major content updates, and multiplayer interactions with other gamers.

Beyond just commanding greater attention, technology and new creative talents have empowered games to provide an experience unlike any other format. Character development, visual storytelling, interactive experiences and community exist in ways they never could before.

The gaming industry is at a tipping point, with an unprecedented moment of opportunity to create seamlessly immersive experiences for their biggest fans and grow into world-beating entertainment brands. However, capitalizing on this moment will require game design studios and parent companies to take advantage of an important new asset: first-party user data.

The future of immersive consumer experiences

What will the difference be between an immersive Fortnite or Minecraft experience in 2022 and an immersive Disney or Universal Studios experience in 1999? Let’s start by looking at the ultimate example of a comprehensive consumer experience: Disney World. For fans of popular Disney franchises like Toy Story or Frozen, Disney World offers the opportunity to pay an entrance fee and spend a day immersed in the worlds of their favorite characters. Beyond that upfront cost, park visitors pay for additional products and services, including food, merchandise, and premium experiences.

Even a family streaming the latest Disney film like “Encanto” at home through Disney+ will find themselves listening to songs such as “We Don’t Talk About Bruno” for weeks on end and buying toys of their kids’ favorite characters. The Disney+ subscription experience may itself soon provide a portal to a wider connected Disney experience, as seen during the 2021 Disney+ Day event that gave subscribers perks such as free shipping from the shopDisney store and early access to theme parks at the Walt Disney World Resort and Disneyland Resort.

Connected franchise gaming can create a similar all-encompassing experience for fans that rivals the Disney model. Cloud gaming services such as Microsoft’s Game Pass and Amazon Luna may just be the forerunners for more ambitious services that treat the monthly subscription fee like buying a ticket to enter a real-world theme park. Such subscription plans already provide immediate access to a variety of games, but they could also open the door for the franchise to sell additional in-game perks—such as customizable appearances for game characters—along with real-life branded merch or costumes. The franchise could even upsell subscribers on additional premium experiences such as concerts and special fan events.

Creating a truly immersive consumer experience will require gaming franchises to think big and consider how every touchpoint connects and interacts in their new universe. Especially with the expanded diversity of devices, the emerging Metaverse evolution, as well as the adoption of VR/AR and blockchain technologies. The company will need to know at what moment customers typically move from playing a game to buying physical merchandise, or at what point they decided to switch over to a streaming video platform to watch a show based on that game. For gaming companies to achieve this level of insight, they will need to collect, organize and analyze tremendous amounts of user data.

With any individual user potentially spending dozens of hours per week on an online game, there’s no doubt that gaming companies have access to the volume of raw data needed to build an immersive experience. However, these franchises can’t rely on data alone — they will need advanced data infrastructure and analytics approaches to turn that raw material into actionable insights for sustaining and growing connected franchise gaming.

A connected gaming experience will require skillful use of three types of analytics:

These data analytics solutions are all designed to track and understand the customer journey: what decisions customers make, when they make them, and why. The right data engineering infrastructure, combined with sophisticated, carefully considered analysis tools, can provide gaming companies with the information they need to create a next-generation immersive experience.

This moment for connected franchise gaming has been made possible because of technologies underpinning the rise of faster broadband internet and mobile networks. For most of the game industry’s existence, the gaming experience primarily lived on video game consoles and other platforms that weren’t necessarily connected to the internet. Nowadays, gamers can increasingly plug into their favorite gaming franchise wherever and whenever they want as long as they have the broadband connection to support streaming even the most graphically intensive games and VR/AR experiences.

Multiple players are converging on this new opportunity. Big tech companies are investing more in gaming. For example, Microsoft’s acquisition of game publisher Activision Blizzard is likely to boost the value proposition of its popular Game Pass service. Meanwhile, Amazon is making similarly ambitious efforts to build out its Luna cloud gaming service and find synergy with its Twitch live streaming platform favored by gamers and esports fans.

Major entertainment brands like streaming giant Netflix are also expanding into gaming through acquisitions of game studios, developing new programming based on existing games, and establishing content partnerships with major game publishers such as Riot Games. Game studios are also looking for ways to create more immersive experiences that feel bigger than life. Epic Games’ popular franchise Fortnite has been featured in crossovers with the Marvel Cinematic Universe and pop music icon, Ariana Grande. Even brands as old as Batman (debuted in May 1939) are finding compelling ways to reinvigorate the brand and bring people further into the world of the caped crusader. Through series such as Batman: Arkham City (2011), fans were able to experience and understand their hero in a whole new way, exploring the expansive and interactive world that forged the bat!

It is exciting to see how the gaming world is expanding. Whether it is large AAA studios or Indie shops around the world, the amount of innovation and creativity that is coming forward in the space is awe inspiring. Each of these leading organizations has the potential to revolutionize the way we experience and interact with our favorite games, but it will take a sophisticated data analytics approach to make it happen. It’s time to start planning and investing around data analytics capabilities that can empower a growth strategy for connected franchise gaming.