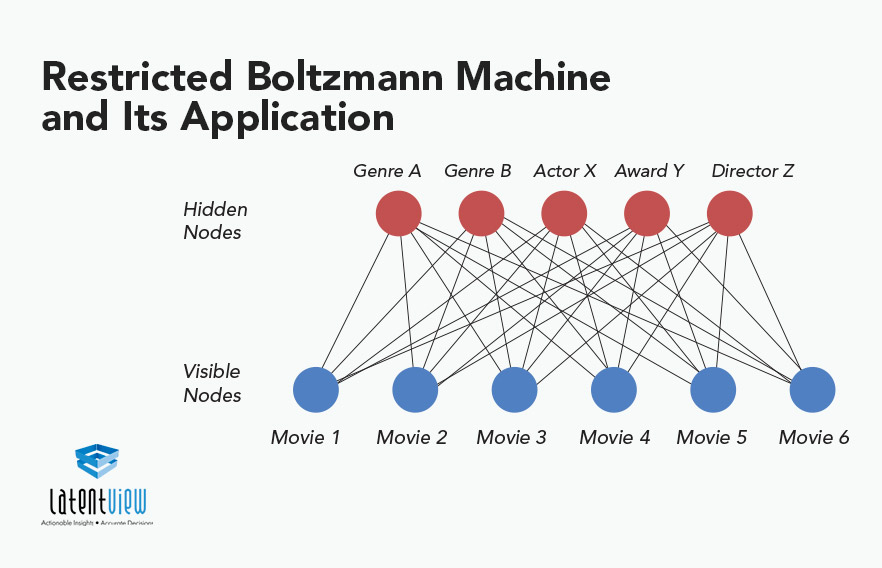 Restricted Boltzmann Machine and Its Application

Invented by Geoffrey Hinton in 1985, Restricted Boltzmann Machine which falls under the category of unsupervised learning algorithms is a network of symmetrically connected neuron-like units that make stochastic decisions. This deep learning algorithm became very popular after the Netflix Competition where RBM was used as a collaborative filtering technique to predict user ratings for movies and beat most of its competition. It is useful for regression, classification, dimensionality reduction, feature learning, topic modelling and collaborative filtering.

Restricted Boltzmann Machines are stochastic two layered neural networks which belong to a category of energy based models that can detect inherent patterns automatically in the data by reconstructing input. They have two layers visible and hidden. Visible layer has input nodes (nodes which receive input data) and the hidden layer is formed by nodes which extract feature information from the data and the output at the hidden layer is a weighted sum of input layers. It might seem strange but they don’t have any output nodes and they don’t have typical binary output through which patterns are learnt. The learning process happens without that capability which makes them different. We only take care of input nodes and don’t worry about hidden nodes. Once the input is provided , RBM’s automatically capture all the patterns , parameters and correlation among the data. That’s the beauty of the Restricted Boltzmann Machine.

Some important features of Boltzmann Machine :

As mentioned earlier Restricted Boltzmann Machine is an unsupervised learning algorithm , so how does it learn without using any output data?  We have a visible layer of neurons that receives input data which is multiplied by some weights and added to a bias value at the hidden layer neuron to generate output. Then the output value generated at the hidden layer neuron will become a new input which is then multiplied with the same weights and then bias of the visible layer will be added to regenerate input. This process is called reconstruction or backward pass. Then the regenerated input will be compared with the original input if it matches or not. This process will keep on happening until the regenerated input is aligned with the original input.

For Example , we have a six set of movies Avatar , Oblivion , Avengers, Gravity, Wonder Woman and Fast & Furious 7. So, movies will become visible neurons and the latent features which we are trying to learn will become hidden neurons. Below diagram shows the Restricted Boltzmann Machine formed.

Here Avatar , Oblivion and Gravity will fall under Sci-Fi movie genre and remaining will fall under thriller. So, Thriller and Sci-Fi will become hidden neurons of hidden layers which are the features extracted from our input (set of movies).

If a person has told us her set of movie preferences then our RBM can activate the hidden neurons of her preferences. So, those sets of movies will send messages to hidden neurons to update themselves for that user.

Conversely if a user likes Thriller movies then, our RBM can find movies which are turned on by the hidden neuron “Thriller” and hidden neurons will send messages to visible neurons to update their states and this will work as a movie recommendation engine.

If input is represented by v and hidden value by h then, p(h|v) is the prediction. Knowing the hidden values, p(v|h) is used for prediction of regenerated input values. Say this process is repeated k times and after k iterations v_k is obtained from initial input value v_0.

In CD , weights are being updated. First gradient is calculated from reconstructed input and then delta is added to old weights to get new weights.

Advantages and Disadvantages of RBM

To summarize, Restricted Boltzmann Machines are unsupervised two layered neural models that learn from the input distribution. There are many variations and improvements on RBM and the algorithms used for their training and optimization. They are trained using contrastive divergence and after training they can generate novel samples from the training dataset. There are also some modifications which are being made to original RBM’s in order to make them more efficient and representable like in the case of Fuzzy RBM, Infinite RBM.