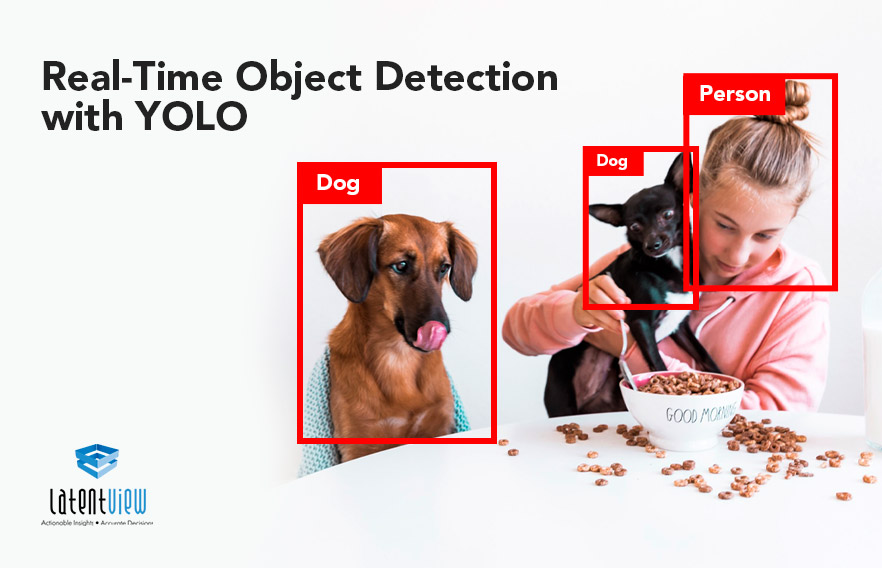 Computer vision is a field of artificial intelligence that deals with how computers can interpret and understand the visual world. It aims to understand and automate tasks that the human visual can do. The computer vision market is expected to grow from $10.9 billion in 2019 to $17.4 billion by 2024-growing at a CAGR of 7.8% during the forecast period(1). Computer vision has applications across multiple industries, some of the prominent ones are

In Computer Vision, a scene is a view of a real-world environment that contains multiple surfaces and objects. Scene understanding can include multiple tasks which are:

The algorithms for object detection can be broadly classified as:

These techniques work well when we do not need real-time detection but they tend to struggle with real time detections due to their slow speed.

In this article we will focus on the YOLO algorithm for real time detection.

YOLO – You Only Look Once

YOLO is the state-of-the-art, real-time object detection system based on the darknet framework. On a Pascal Titan X YOLOv3 processes images at 30 FPS and has a mAP(mean Average Precision) of 57.9% on COCO test-dev(2), a faster version runs at ~ 150 FPS (with less mAP). YOLOv3 is ~100X faster than fast RCNN and 1000X faster than RCNN, while being at par with the accuracy and hence suitable for real-time object detection. Complete prediction is done in single evaluation of the image and hence the name YOLO.

Performance Comparison with other detectors

Compared to the other detectors, YOLOv3 is at par with mAP but much faster than other detectors.(2) Moreover, we can easily trade-off between speed and accuracy simply by changing the size of the model.

YOLO takes the input image, divides it into S X S grid cells. If the center of an object falls into a grid cell, that cell is responsible for detecting that object. Each grid cell predicts B bounding boxes, confidence scores for those boxes and C conditional class probabilities. We multiply the conditional class probabilities and the individual box confidence predictions at test time,  which gives us class-specific confidence scores for each box. Below are mathematical definitions –

In order to understand the YOLO algorithm, we must first understand what YOLO predicts i.e. the components of bounding boxes and anchor boxes.

Bounding Box – Yolo takes the input image and divides it into S x S grid, say 3 x 3 grid. Let’s assume there are three object classes Person, Car, and Truck. For each grid cell, the label y will be predicted which is an eight dimensional vector where

Anchor Boxes– If the center of multiple objects lie in the same cell, we will only be getting one of the two boxes, either for the car or the person. Hence, YOLO uses predefined multiple anchor boxes (in this example 2) for each grid cell.

The y label with two anchor boxes will be:

Now that we have understood the concepts of bounding and anchor boxes, let’s look at the step by step process through which YOLO makes predictions.

Let’s look at an example of an image to understand this (Figure 10). The input image in this case is divided into 19*19 grids cell, with 5 predefined anchor boxes for each grid cell (generally used, might differ as per YOLO version). Totally we will have 1805 anchor boxes and each anchor box will have 85 predicted elements by the network as the output

The output from class scores will look something like this-

At LatentView, we have used YOLOv3 to implement object counting using the people counter use case. The algorithm automatically identifies the class of interest and their respective bounding box and maintains a counter

We have used the pre-trained YOLOV3 model, which is capable of detecting “person” as a class and we count the number of people by maintaining a counter.

We pass the input images of people standing at a counter.

We have successfully implemented object detection using YOLOV3. We can see from Test 1 results that YOLO performs very well when objects are distant from each other. But from Test2 , we can see that it struggles in case of objects that are overlapping or appear in a group.

YOLO is the state of the art real-time object detection algorithm as it is much faster compared to other algorithms while being able to maintain a good accuracy.YOLO network understands generalized object representation, however the spatial constraints limit the accuracy in case of nearby and smaller objects. We have a newer version of this algorithm, YOLOv4 which addresses this problem and is more accurate and faster(7). Overall, YOLO’s speed and accuracy makes it a widely used algorithm for real-time object detection.