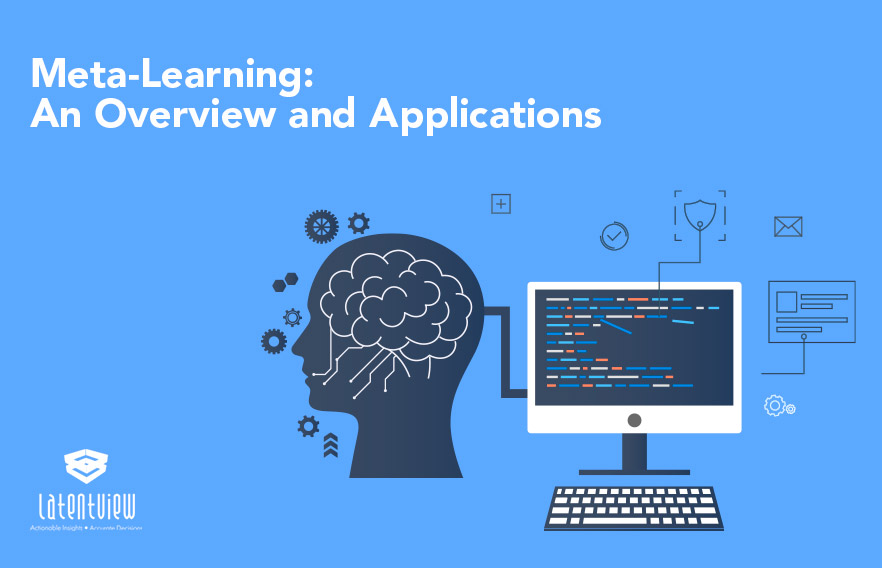 Meta-Learning: An Overview and Applications

Meta-Learning (Learning to Learn) is the science to design models that can learn new skills or adapt to various environments by observing how a learning algorithm performs learning and then learns from the metadata or learn to do new tasks much faster.

Why do we need Meta Learning:

The traditional way of machine learning research is by getting a huge dataset and then training a model from scratch on the data. This is very different from how we humans learn. They leverage their earlier learning to learn very quickly using a handful of data points. eg. Kids learn to differentiate between cats and dogs very quickly by seeing their pictures for just a few times.

Would it be possible to design a model that can learn fast and with fewer data samples? This is what Meta-Learning aims to solve.

The other differences between Meta Learning and traditional Machine Learning is on the scope of focus, for instance machine learning focuses on a certain task , for example breast cancer detection, where machine learning will focus on whether the the patient has a breast cancer or not; whereas the meta learning algorithm will focus on multiple tasks which will involve the traditional classification problem along with the best algorithm to predict and how to optimize the performance of the algorithm using hyperparameter tuning.

The areas of application of meta learning is huge and there are major research opportunities in the future.

If the meta-learning algorithm does not give good results on unseen data sets, then it’s not really meta-learning. An ideal meta learner would be training and learning the procedure of hyperparameter optimization of a neural net , by training that on CIFAR-10 and showing that the algorithm also works on some other image classification problem. Although meta learning and transfer learning may sound similar sometimes, the high level difference would be Meta-learning is more about speeding up the learning process by learning to tune hyperparameters and are more general i.e can be used for multiple tasks whereas transfer learning uses a neural net that has already been trained for some task and reusing that network to train on a new task which is relatively similar to the trained task making it hard to work on diverse tasks

Meta-Learning Variants and its Applications

This is the model which uses an external memory buffer to include new information and not to forget them in future.

The main idea is to use an RNN and add an external memory buffer to it so that it can capture information and in the meantime, any stored information can be easily and steadily accessible.

Let’s take a classification problem for example, in the below diagram is a sample strategy that uses external memory to store information which can be used at a later point of time to get a successful classification when an already seen class is presented.

This prevents the neural network to simply map class labels to outputs, therefore the model has to memorize the information and the memory has to hold the information until the label information is presented later(t+1 in this case).

Reading from Memory:  Given some input xt, the controller produces a key kt, which is then used to fetch a particular memory from a row; i.e., Mt(i). During the read operation, the memory is addressed using cosine similarity which is used to produce a read-weight vector computed according to softmax.

Writing into memory: The mechanism for writing new information into memory operates a lot like the cache replacement policy. The Least Recently Used Access (LRUA) writer is designed for MANN which prefers to write new content to either the least used memory location (so that frequently used information is not lost) or the most recently used memory location(update the memory with newer and more relevant information).

The performance of this classification was compared to human performance to check how efficient the MANN was.

Surprisingly the performance of MANN surpassed that of humans on each instance, also the random guessing on the first instance was also better in MANN.

Below is an architecture diagram of how Meta-Learning can be used for optimization.

For this experiment we have a learner which is a simple CNN with 4 layer Conv network; each with kernel size (3,3) and 32 filters, followed by batch normalization, ReLU non linearity and a (2,2) max pooling layer and having a final softmax layer for the number of classes considered

The data set used is a custom built Mini-Imagenet dataset by selecting a random 100 classes from ImageNet and picking 600 examples of each class and using 64, 16, and 20 classes for training, validation and testing, respectively. Considering 1shot and 5-shot classification for 5 classes. We use 15 examples per class for evaluation in each test set.

The benchmark that are used to compare the performance are

In MAML we try to find these optimal weights by learning from the distribution of similar tasks so that we don’t have to start with randomly initialized weights instead, we can start with optimal weights which will take lesser gradient steps to reach convergence.

In the below diagram model-agnostic meta-learning algorithm (MAML), which optimizes for a representation θ that can quickly adapt to new tasks.

Objective is to see how quickly can the algorithm learn a new real valued function (sinusoidal function with varying amplitude and frequency ).

The red sine curve is an example curve that we are trying to learn and the purple dots are the 5 data points which will help in learning the function.

With just one gradient step and 5 data points MAML was able to learn very closely how to match the curve. It is interesting to see that though the data points are from the right side of the curve the algorithm is able to learn that this is a sinusoidal curve and has a high amplitude on the left as well. So it is safe to say that it is not just interpolating.

Other use cases for MAML would be 2D Navigation and Locomotion using Reinforcement learning.

Meta-Learning is an exciting trend in the area of AI research as it will allow machines to make better decisions and also improve their decision-making by tuning their hyperparameters. Meta-learning is not limited only to semi-supervised tasks and can be used across multiple domains like recommendation systems etc. Meta-learning is a vast topic and this area has recently seen rapid growth in interest. Although there is some confusion about where this can be applied to and how it can be benchmarked but the scope of this in the near future is immense.