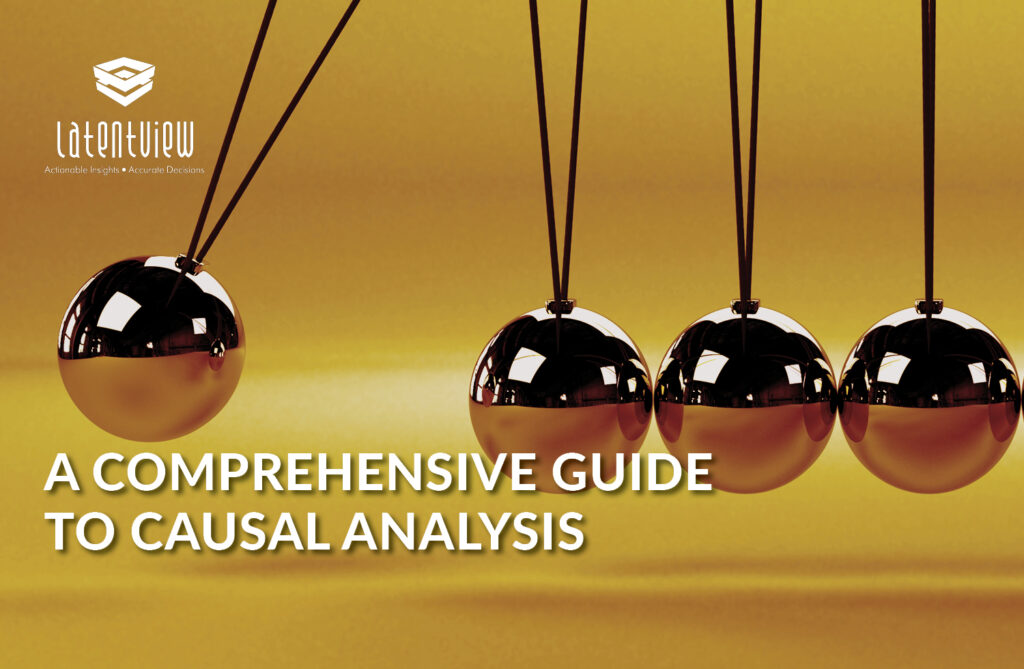 Before going into causal analysis and inference at any depth, it is important to raise the following questions:

The following aims to answer all those questions by first elaborating on the issues with traditional machine learning approaches.

REASON FOR EVOLUTION OF CAUSAL MODEL

For making decisions based on real-world data, we often go with a traditional machine learning model. The standard predictive machine learning model can identify the patterns in the data sets and predict accordingly, but the model does not explain the patterns or the reasons for their occurrence. It is not enough just to find statistical patterns in the data; the causal structure in the data also needs to be identified for making appropriate decisions.

The above image is the ladder of causation stated in “The Book of Why” by Prof. Judea Pearl, who developed a theory of causal and counterfactual inference based on structural models. Most machine learning and complex deep learning models lie at the bottom-most rung of this ladder because they make predictions only based on associations or correlations amongst different variables. But they don’t give answers to the “what if? and why?” questions which are described in the 2nd and 3rd rung.

CAUSAL INFERENCE AND USE CASES

Causal inference refers to the process of drawing the conclusion that a specific treatment was the cause of the effect that was observed. The basic principle of causal analysis is to treat the cause rather than the symptoms. A root cause is a fundamental reason why something happens, and it can be quite distant from the original effect.

The Causal model helps to answer the following questions.

For building causal models, we mainly use graph structures. However, it is important to understand certain causal terms before understanding a graph structure. Let us see about some essential terms like confounder, treatment, instrument, outcome, and treatment effect.

Instrument: Instrument variable is the one that has direct causal effect on the treatment variable but not on the outcome variable. For example, mental pressure may trigger a person to drink alcohol, but it is not directly related to lung cancer.

Outcome: It is the one that depends or gets influenced by the input feature/independent feature. Simply, it is the one that all the treatment features can manifest. For example, lung cancer is the outcome variable in the above image.

Here, we explore the methods for implementing causal models in a real-world scenario. Many methods are available for causal model implementation – some of them come up with basic concepts, and some use machine learning concepts. Here is a list of some methods that will help us to build a causal model.

In this method, the parameters having similar values of covariant, i.e., propensity scores, are grouped, and their treatment differences between treated and untreated units are calculated for finding ATE, ATT etc., Propensity score is a single number that summarises all the unit’s covariance. This method is like a standard regression method.

In this method, the entire group is split into homogeneous subgroups. Within each subgroup, the treated group and the control group are similar under certain measurements over covariates, and the treatment effect within each subgroup is calculated. This is mainly used to adjust selection bias.

This method is used when the dataset has too many features for statistical approach, or its effects are not modelled properly. It is recommended to use when the treatment variable is categorical, and all the potential confounders are observed. It helps to estimate heterogeneous treatment effects and uses machine learning algorithms for basic prediction.

This method can also be used when the dataset has too many features. Using a flexible nonlinear approach helps to estimate heterogeneous treatment effects and confidence intervals.

This method can be used if we have multiple responses.

In Meta learners, we have four different types of learners.

By calculating the response function, the T learner helps estimate the conditional expectations of the outcome separately for control and treatment groups, and their differences gives the heterogeneous treatment effect of the treatment variable on the outcome variable.

The S-Learner is like the T-Learner, except that when we estimate the outcome, we use all predictors without giving treatment variables a special role. The treatment indicator is included as a feature similar to all the other features without the indicator being given any special role.

It uses domain adaptation techniques to account for covariant shifts among treatment arms.

DML helps to estimate heterogeneous treatment effects and confidence intervals for measuring the uncertainty of the model. This method is recommended when we have a classification type of problem and for the one having a single response. The main advantage of this method is that it aims to correct both regularisation bias and overfitting bias by means of orthogonalization and cross fitting, respectively. DML also comes up with many variants like linearDML, sparseDML, causalforestDML, kernel DML, etc., and it will be used based on the type of dataset.

Use case of the application of a causal model to make decisions in the real-world scenario:

In this case, our main goal is to find the features that mainly influence credit card preference. It will be helpful for the client to do an effective campaign by choosing the right method for a particular customer with minimal cost.

The dataset was obtained from a multinational hospitality company. The obtained dataset contains 297 attributes which includes demographic information, stay details, services details and so on.

For training the model, suitable attributes that contribute more towards the outcome are selected based on domain knowledge. For example, to find the treatment/causal effect of ‘campaign variable’, all the related features need to be fetched from the similar period. Hence for model implementation, only features collected for a one-month duration are considered for training the causal model.

We first build a model based on a traditional machine learning approach by using light gradient boosting. By using Shapley value, the feature having a high impact on the outcome is ordered.

The results obtained from traditional ML are tabulated below

By observing, the traditional model mainly focuses on avoiding lost causes (predicting more accurate negative responses). But as per business perspective, models need to target the sample having a positive response (persuadable customer). Moreover, the traditional model doesn’t show whether the features have a positive impact on the outcome, the percentage of the feature’s influence and how the treatment on different features impacts different segments of the population.

To understand the causal effect, we have moved from the traditional model to a causal model. For implementing the causal model, we choose double machine learning because our target variable is categorical, and we need only one response. The causal model helps to find answers to various causal questions like the following.

For finding the global treatment effect, the features are sorted based on the p-value, which has above 95% of confidence based on ATE calculated on the entire population for top features.

To predict the customer who is likely to purchase a credit card, customers are sorted based on the most influential causal features. Then we observed that for the top 20% of customers ranked by the causal model, almost 81% of customers showed interest in buying a credit card. It will be useful to target the right customer.

For each customer, corresponding regression coefficient of the treatment variable (marginal cost) obtained from CATE is be taken as a treatment cost, and they are segmented based on their response towards increase or decrease in treatment. For example, segmenting customers based on their response, when they receive an increased number of hotel mails. The impact of the hotel mails on the customer globally and individually is given in the below table.

The result shows that, for any campaign through hotel mails, we can focus only on 1% of customers to get 99% response, instead of 9.6% response on the entire population. This will help the company to target the right customer.

Hence, we can draw the inference that the causal model helps us to obtain multiple causal results, and that these results will be helpful in making accurate decisions under different circumstances.