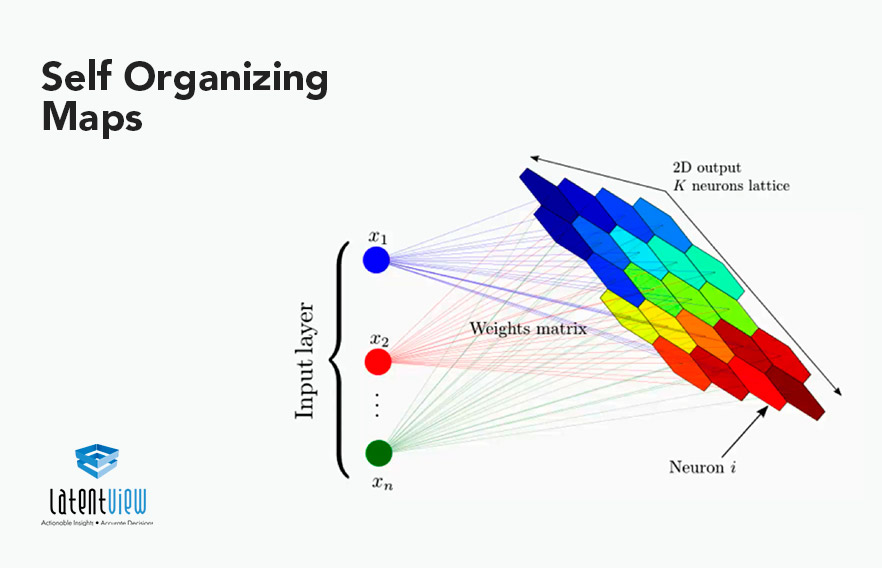 Self Organizing Maps (SOM) or Kohenin’s map is a type of artificial neural network introduced by Teuvo Kohonen in the 1980s.

A SOM is an unsupervised learning algorithm trained using dimensionality reduction (typically two-dimensional), discretized representation of input space of the training samples, called a map. It differs from other ANN as they apply competitive learning and not the error-correction learning (like backpropagation with gradient descent). They use a neighborhood function to preserve the topological properties of the input space to reduce data by creating a spatially organized representation, and also helps to discover the correlation between data.

Although SOM has been initially proposed for data visualization, it has been applied to different problems, including a solution to the Traveling Salesman Problem (TSP).

Self-organizing maps consist of two layers, the first one is the input layer, and the second one is the output layer, also called a feature map.

SOM can integrate multi-modal input vectors and can extract relations among them in a 2-dimensional plane. SOM can also be used for the clustering of unlabeled data or classify labeled data with labeling the output units after learning. Unlike other ANN types, SOM doesn’t have activation functions in neurons, and we directly pass weights to the output layer without doing anything.

What really happens in SOM?

Each data point in the data set competes to get recognition for representation. SOM mapping steps start from initializing the weight vectors. From there, a sample vector is selected randomly, and the map of the weight vectors is searched to find the weight which can best represent that sample. Each weight vector maintains neighboring weights that are close to it. The weight that is selected is rewarded by being able to become more like that randomly selected sample vector. The neighbors of that weight are also considered by being able to become more like the selected sample vector. This allows the map to form different shapes. Most generally, they have square/rectangular/hexagonal/L shapes in the 2D feature space.

The learning procedure of a SOM is described below.

1. Let wi,j(t) be the weight from an input layer unit i to a Kohonen layer unit j at time t. Wi,j is initialized using random numbers.

2. Let xi(t) be the data input to the input layer unit i at time t; calculate the Euclidean distance dj between xi(t) and wi,j(t)

3. Search for a Kohonen layer unit to minimize dj , which is designated as the best matching unit.

4. Update the weight wi,j(t) of a Kohonen layer unit contained in the neighborhood region of the best matching unit Nc (t) using (2), where α(t) is a learning coefficient.

5. Repeat processes 2–4 up to the maximum iteration of learning.

Best Matching Unit is a technique which calculates the distance from each weight to the sample vector, by running through the entire set.

Let’s look at the process in detail-

SOM is an ANN-based method that projects data into a low-dimensional grid for unsupervised clustering. The input nodes are the ‘n’ features, and the output nodes are the ‘m’ prototypes. The revised SOM is applied to various standard input data sets, and the experimental results prove that the revised SOM is better than the conventional SOM. It is also shown that revised SOM reaches to the outlier’s data, where conventional SOM could never reach. The results have shown that the modified SOM preserves the topology of the input dataset more efficiently and correctly. The modified SOM has a much lower topographic and quantization error, which is desirable.
Finally, SOM’s distinct training architecture provides ease for the realization of parallel clustering and incremental clustering.