TIME-SERIES COMPONENTS
Our current scientific literature provides us with numerous techniques for modelling time-series that have originated from different fields of study, ranging from Classical Statistics to Complex Signal Processing Algebra. A major family of these techniques, named Structured Time-Series Models build on the idea that a time-series can be separated into certain components to which we can attribute a time-series’ properties.

• SEASONAL COMPONENT
Seasonal component or Seasonality of a time-series refers to the periodic variations inherent in the data. These periodic deviations generally arise due to systemic factors such as effect of weathers, marketing campaigns etc. For e.g. increased sales every holiday season, a change in stock market trading activity every three months on account of Quarterly Earnings Reports etc.

• TREND COMPONENT
Trend Component refers to the pattern followed by the mean of the series with time over a long term, either increasing or decreasing & the nature of this change, either linear or non-linear or ambiguous.

• CYCLIC COMPONENT
Cyclic component refers to a recurrent though not periodic variation inherent in the series. This usually is correlated to the business cycle of the entity. The business cycle refers to the fluctuations in the macro-economic factors defined in terms of booms and recessions. It differs from the Seasonal component in the way that the average length of the cyclic patterns is much longer than the seasonal pattern and the fluctuations are of varying duration. 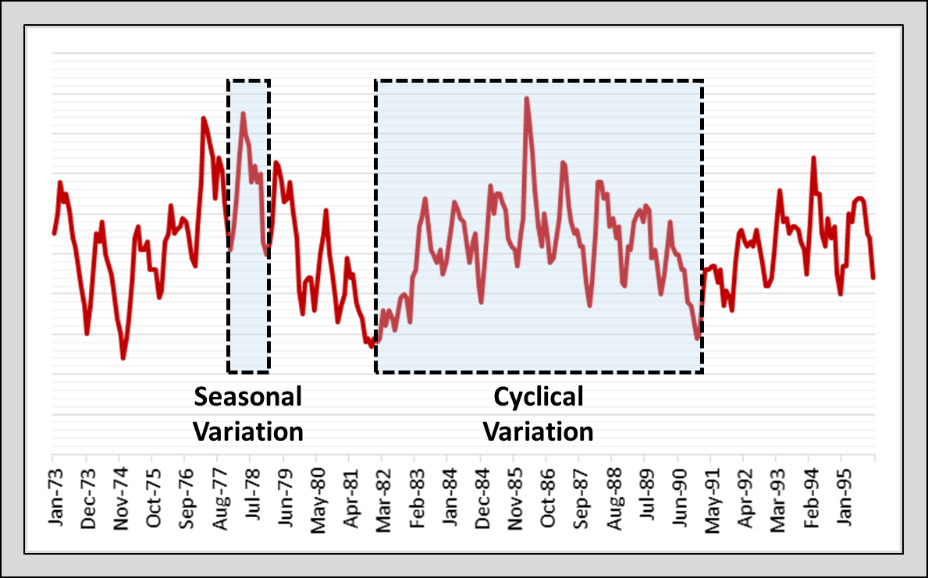 Model Based Approach:
Under this approach, explicit models are built for each of the time-series’ components to explain their behaviour. The context of this approach can be clearly understood by considering the following example

• Fourier Transformation modelling of the Seasonality

The Fourier Transformation is built on the insight that any time signal (in our case, a time-series) can be interpreted as a linear combination of sinusoidal waves with different amplitudes & frequencies. Consider a time-series with N observations. A generic element Y(t) of this series can be modelled by Fourier Transformation (i.e. a linear along with an error component e(t)

Filter Based Approach:
Filter based methods do not assume any individual models for the components. The extraction of the components is done using ad-hoc filters to the raw time series. These filters decompose the time-series into components generally through successive iterations of smoothing. These methods are non-parametric.

We will be using the STL algorithm for decomposing a time-series as we move forward in this series owing to its versatility to time-series with any seasonality and its simplicity in application. 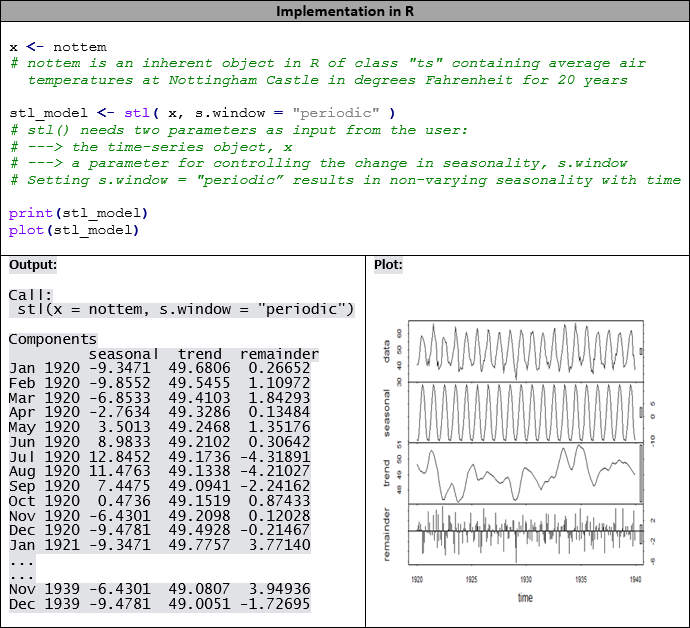