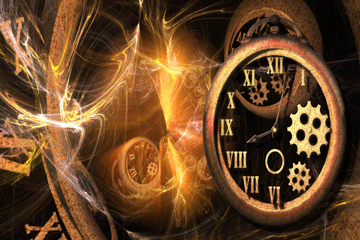 As we see in a generic mathematical representation of the idea, a particular observation at time T+1 is a weighted average of all the preceding observations at times T, T-1, T-2, …, 2, 1 in the series and the rate at which the weights decay exponentially is controlled by the smoothing parameter represented by, which varies between 0 & 1.

We start by looking at the simplest model in the framework which builds on the above assumption of exponentially decreasing weights. This model doesn’t take into account any seasonal or trend effects and hence, is suitable for application on time-series with very weak Seasonality & Trend. ( For a quantitative measure of these attributes, please refer the previous article in the series )

Defining the Modelling Equation
Drawing from the aforementioned idea, a generic observation of a time-series can be represented as follows

The notation can be simplified further in the following way;

Computing the model parameters
To provide closure for the series, every model under the ETS framework requires an initialization of the first observation of the series.

The aforementioned assignment is not the only option for initializing the model. We can also set the value to the mean of the series, among other alternatives.
Once initialized, the next step involves the calculation of the parameter, α. To choose the optimum value for the parameter, we follow an approach similar to that of in Multiple Linear Regression. We select a loss function like the Sum of Squared Errors (SSE) and

select the optimum value of the parameter, alpha which minimizes the loss function.

EXTENDING THE SIMPLE ETS MODEL TO ACCOUNT FOR SEASONALITY & TREND

Though the use-cases of the Simple ETS model are limited due to the presence of a Seasonal or Trend component in most of the series under consideration, understanding the steps in the computation of the model provides us a stepping stone for the more complex models in the framework. To expand the scope of the Simple ETS model to time-series’ with Seasonality & Trend attributes, these components are characterized explicitly through separate equations which are characterized by their own independent parameters. Consider the following example

TAXONOMY OF THE ETS MODELS

The flexibility of the ETS framework lies in its ability to model Seasonality & Trend components of different natures in a generic way. Let’s examine the multiplicative seasonality version of the Holt Winters model shown below;br/>

Considering the following variants of each of the time-series’ components; 2 for the Remainder, 5 for the Trend & 3 for the Seasonality shown below;

RECURSIVE APPROACH: We calculate the one-step ahead forecasts recursively for each of the future horizons. This can be better understood as shown below.

DIRECT APPROACH:An alternative approach is to extrapolate the modelling equation for the future horizons as shown. 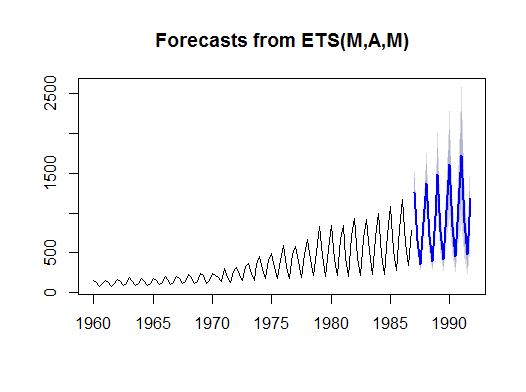